The Polygon (MATIC) price has been trapped within a symmetrical triangle pattern for nearly a month now. The pattern range reflects a no-trading zone; however, the narrowed price action should eventually result in a decisive breakout. Thus, this pattern’s outcome should reveal the upcoming rally in MATIC. 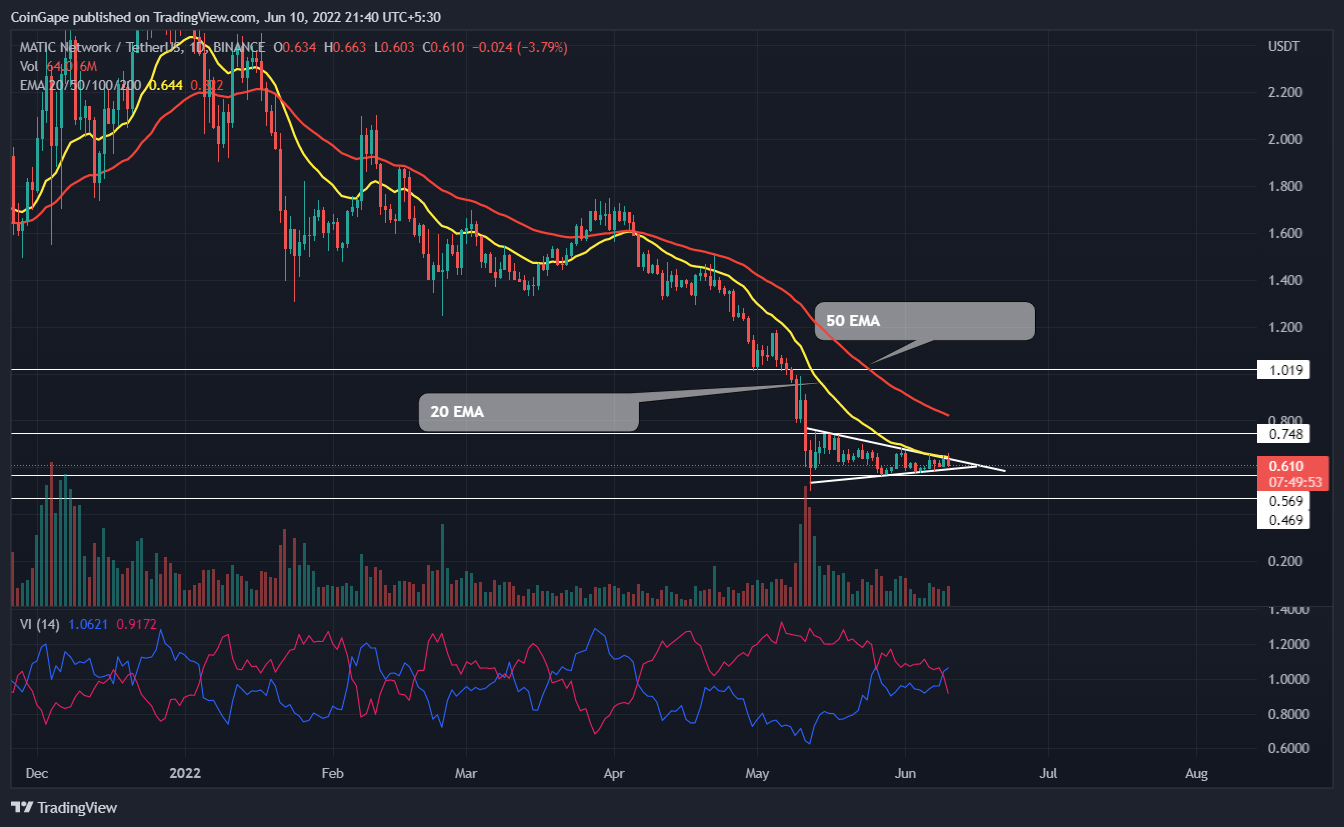 The early-May bloodbath took a breather after the MATIC / USDT pair hit a low of $ 0.584. The buyers tried to recover the discount price but failed to breach even the immediate resistance of $ 0.785.

However, MATIC continued to follow a later path, reflecting uncertainty among the market participants. Furthermore, this consolidation has shaped into a symmetrical triangle pattern which may bolster further price movement.

Though this continuation pattern usually resumes the prevailing trends, indicating the MATIC price would breach the support trendline. Thus, if sellers succeed in pulling the price below ascending trendline, the altcoin would sink 18.2% lower to $ 0.47

However, on a contrary note, the symmetrical triangle pattern poses a possibility of a double breakout. Therefore, to avoid the consolidation trap, the traders must for a genuine breakout before positioning their fund.

This, a potential breakout from the resistance trendline, would drive the MATIC price 120% higher to $ 1.

The VI + and VI- slopes offer a bullish crossover amid consolidation indicating the buyer’s attempts to wrest control from sellers. This crossover may attract additional buyers to trigger a bullish breakout from the triangle pattern.

Conversely, the fast-moving 20-day EMA moves along with descending forms an additional barrier for buyers to prevent upside breakout. Moreover, the bearish alignment among the 50, 100, and 200 indicates the path to least resistance is down.

From the past 5 years I working in Journalism. I follow the Blockchain & Cryptocurrency from last 3 years. I have written on a variety of different topics including fashion, beauty, entertainment, and finance. raech out to me at brian (at) coingape.com

The presented content may include the personal opinion of the author and is subject to market condition. Do your market research before investing in cryptocurrencies. The author or the publication does not hold any responsibility for your personal financial loss.