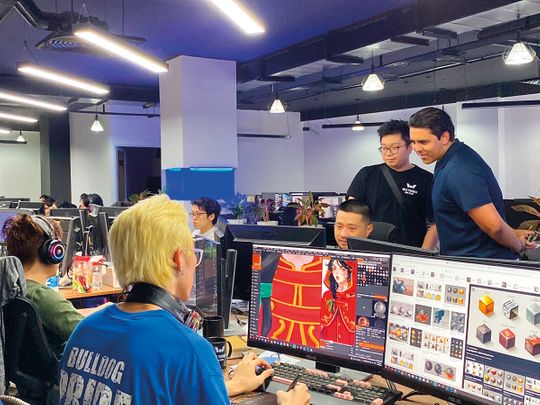 Within mere months, the Wild Thunder Studio has become one of the most renowned game development studios for crafting world-class gaming experiences utilizing innovative blockchain technology.

“When I first met Dustin, Wild Thunder’s co-founder, I was inspired by his vision to build a world-class triple-A quality gaming studio, and chose to invest in him and his vision and partner up in business to co-found. Wild Thunder, ”says Haydn Snape, DIG Founder and Managing Global Partner. Together, Snape and Nguyen embarked on the journey of hiring each individual team member based on their exceptional design work and artistic talent, to create a team of over 120 multi-talented designers, game artists and game developers.

“Wild Thunder is fast becoming one of the world’s leading, celebrated blockchain game development studios, which is completely on par with DIG’s ethos to invest in the best of the best in this industry,” says Snape.

With DIG’s guidance, Wild Thunder will expand its current portfolio to begin creating avant-garde Hollywood-quality animation and designs as well as play-and-earn gaming experiences, all powered by cutting edge blockchain technology, all from the studio’s offices in Hanoi, Vietnam.

Indeed, the studio already has a Hollywood project brewing, as DIG expands into the film and entertainment industry, with plans to reveal the exciting new project underway.

Meanwhile, Wild Thunder creates designs of the highest caliber, enthralling gamers worldwide through a reliable, universal tokenomics system that is powered by blockchain technology. It has already gained popularity as

the hottest new game development studio in the industry through its work on last year’s most highly anticipated play-to-earn game, Realms of Ethernity (RoE), a first-of-its-kind blockchain-powered massively multiplayer

Described as the “most anticipated game of 2022” by blockchain and crypto enthusiasts, Realms of Ethernity has a solidified and eager fanbase who sold out an exclusive free mint for $ RETH token holders in under four hours. There are even hints that a celebrity voice-over will be attached to the game once the beta version is released early next year, but Wild Thunder is keeping quiet about who the celebrity might be, for now.

Nevertheless, the Wild Thunder team has been hard at work on RoE, the world’s first AAA quality, play-to-earn, NFT MMORPG. RoE, says Wild Thunder, will be a polished, rich, third-person open world built in Unity 3D with stunning audio-visual quality allowing players true ownership of the game’s assets. It has firmly positioned Wild Thunder as “one to watch” in Southeast Asia as a production house that’s leading the charge in the use of blockchain technology.

“We are so proud to be known as the studio behind the development of Realms of Ethernity,” says Dustin Nguyen, Co-Founder of Wild Thunder. “We are in the business of crafting the future of blockchain gaming, creating digital landscapes where players will have the freedom to earn from, and contribute to, a stable and sustainable economy, forever changing the future of blockchain gaming in the metaverse.”

Working with DIG and its Miami-based GameFi subsidiary, XYZZY, Wid Thunder will bring DIG’s and XYZZY’s GameFi projects to life, helping brands enter the metaverse with blockchain-enabled games and NFTs, and allowing new unique assets and experiences in Web3 through exceptional design. work that is relentlessly innovative in its use of blockchain technology.

“Creating rich, varied, virtual worlds that are immersive and beautifully designed is part of our strong design ethos,” says Dustin. “We are creating a world worthy of exploring, and we are perfectly placed to see this get done.”