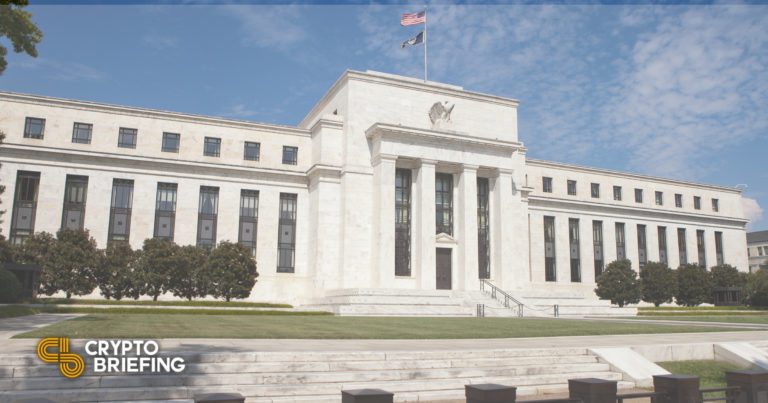 Earlier today, the Federal Open Market Committee, a key decision-making committee within the Federal Reserve System, concluded its March meeting. As anticipated, the Fed has made the decision to raise interest rates by 25 basis points, bringing them from near zero to between 0.25% and 0.5%.

The Federal Reserve, which is mandated by Congress to help maintain price stability and maximum employment, raised interest rates by 25 basis points today, as was largely expected.

Today’s decision was not unanimous. The vote was 8-1, with the president of the Federal Reserve Bank of St. Louis favoring a 50 basis-point hike.

The Fed’s governing body also updated its projection for this year’s federal funds rate from its December projection of 0.9% to 1.9%, an increase Chair Powell noted after the release. Interest rates of 1.9% at year end translates to between seven and eight 25-basis point increases total.

The crypto market rallied slightly in the final lead up to the release of the FOMC meeting, dropping slightly as it became increasingly imminent. Total crypto market capitalization, as well as those of Bitcoin and Ethereum, remains up on the day overall but slightly down following the Fed’s decision to raise rates.

The Federal Reserve also released its new projections for gross domestic product for 2022. In December, it predicted 4% economic growth, but today it revised this number down to 2.8%. While that is lower than previously projected, Powell opined how 2.8% would still be considered strong growth.

Chair Powell noted today his view that the risk of a recession was not “particularly elevated” for this year.

In a press conference following the announcement, Fed Chair Jerome Powell noted that the Committee would likely continue raising rates in future meetings as well as reduce the assets on its balance sheet in an coming meeting. He again emphasized that a strong economy, combined with low unemployment and increasing inflation, made federal funds rate increases appropriate.

Last month, the Federal Reserve passed major rules on itself that would bar its members from trading stocks and cryptocurrencies.

Disclosure: At the time of writing, the author of this piece owned BTC, ETH, and several other cryptocurrencies.

NFT Express: Your on-ramp to the world of NFTs

At Tatum, we’ve already made it super easy to create your own NFTs on multiple blockchains without having to learn Solidity or create your own smart contracts. Anyone can deploy …

The Fed will stick to its plan of raising interest rates in March, according to the report from this week’s Federal Open Market Committee meeting, released today. Although the move …