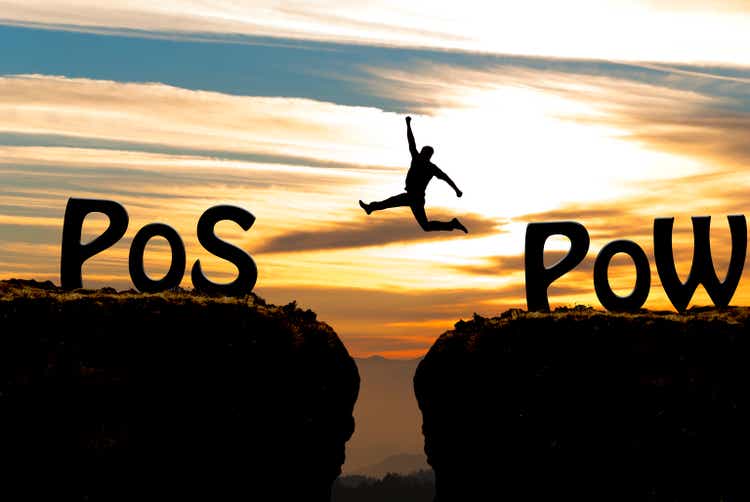 Many readers were enthusiastic about HIVE Blockchain Technologies (NASDAQ: HIVE) after our coverage about a month ago. The only gripe against HIVE was that about half of HIVE’s earnings are derived from Ethereum (ETH-USD) and that Ethereum is expected to switch from PoW (Proof-of-Work) to PoS (Proof-of-Stake).

We explained that we could not include such a discussion in the previous coverage due to the depth of the problem. Therefore, this article is our long-awaited thesis on HIVE’s pivot away from PoS Ethereum.

HIVE’s Pivot Away From Ethereum

HIVE’s 2022Q1 report released in Q3 (Noted previously as “The Catch”) contains management insights up to and including July 19, 2022.

This Management’s Discussion & Analysis contains information up to and including July 19, 2022.

On 15th July 2022, Ethereum developers have already penciled in September as the merge date. On the contrary, HIVE stated that it believes that Ethereum could still use PoW in the years to come.

The Company (HIVE) believes the broader Ethereum ecosystem derives resilience, decentralization and high security by Ethereum remaining as a proof-of-work system, and expects it to remain as such. for years to come.

HIVE also defended the use of PoW over PoS, stating that PoW is safer, not as energy intensive as the public thinks, and has less regulatory risk. Nevertheless, Ethereum developers confirmed that PoS would reduce energy consumption by ~ 99.95%.

We believe HIVE’s statement can be justified because the transition process (known as “The Merge”) could suffer further delays. Originally, the transition to PoS was scheduled for 2019, it got delayed till June 2022 before delaying again until September 19th.

Before the Ethereum Core Developer Meeting on the 18th of August, nobody (not even the ETH developers) knew for sure when can “The Merge” be completed for Ethereum to transit from PoW (Proof-of-Work) to PoW.

We could also say that HIVE is not ignorant for continuing mining ETH even though ETH is bound to transit to PoS. For instance, Ethereum Classic’s (ETC-USD) network hash rate increased 50% after the Ethereum Core Developer on the 18th of August. This suggests that many miners have already begun switching to ETH. However, switching over right now would mean HIVE’s GPU mining yield would decrease by a third (Fig. 4). Hence, this can justify HIVE’s persistence in continuing its ETH mining

Table 1 shows that the ETH reserve is decreasing over time while the Bitcoin reserve is increasing. This means that HIVE is selling its reserves on top of all the Ethereum mined.

Secondly, the proportion of ETH production over the overall production (BTC + ETH) is decreasing QoQ. Eventually, ETH production will be zero as HIVE explores GPU mining on ETH alternatives:

HIVE believes there is intrinsic value in a broadly decentralized PoW blockchain with Layer 2 smart contracts, as the majority of such projects exist on the Ethereum blockchain. If NFT and DeFi developers realize that a secure PoW Layer 1 blockchain is the best playing field for their code-based projects, there could be an increase in Layer 2 applications on the Ethereum Classic blockchain, after the Merge.

In short, what these tell us is Ethereum is pivoting away from Ethereum entirely.

There are 3 things HIVE could do. Out of the three, 2 were indicated by HIVE themselves.

i. Substitute ETH with other GPU-minable but ASIC-Resistant Protocols

Firstly, HIVE will look for other GPU minable coins / tokens that are also ASIC resistant.

HIVE believes there is intrinsic value in a broadly decentralized PoW blockchain with Layer 2 smart contracts, as the majority of such projects exist on the Ethereum blockchain.

If NFT and DeFi developers realize that a secure PoW Layer 1 blockchain is the best playing field for their code-based projects, there could be an increase in Layer 2 applications on the Ethereum Classic blockchain, after the Merge. “

According to this statement, HIVE will look for existing layer 2 PoW protocols built on top of Ethereum. However, there is a higher chance HIVE could start mining ETC as HIVE has conducted studies on ETC mining.

The Company has already commenced case studies, analyzing hashrate economics of Ethereum Classic and other GPU mineable coins at an industrial scale. HIVE has also been performing GPU optimizations throughout calendar 2022, which are proprietary and provide the Company with a competitive edge.

Another piece of evidence to back this thesis is the 50% spike in the ETC network hash rate which coincided with the Ethereum Corer Developers meeting on August 18. We now know that the merge progress is 96% completed a week ago and developers confirmed that Ethereum will transit to PoS in September. Based on the 80% benchmark stated above, September 2022 would mark the end of ETH’s PoW era.

In other words, we could also say that the spike suggests that more miners are anticipating a PoS ETH and are already pivoting to ETC as a substitution.

Therefore, ETC remains the most probable protocol for HIVE to mine. We will wait for further confirmation to begin re-evaluating HIVE’s profitability potential.

In addition to our crypto-currency mining operations, the Company has continued its efforts to upgrade and expand its facilities to enable HIVE to offer High Performance Computing to companies in the gaming, artificial intelligence and graphics rendering industries.

This is very much similar to Soluna Holdings’ (SLNH) strategy. According to SLNH, crypto mining companies powered by renewable energy could offer cloud computing services at a much lower price (as much as 75% lower) than the likes of Amazon’s (AMZN) AWS (Amazon Web Services). This is especially true since HIVE is one of the most efficient crypto miners.

Soluna also noted that HPC could hedge against the crypto bear market.

Therefore, we expect HPC to contribute sizably to HIVE’s top line in the near future.

However, one thing to note is that earnings from HPC are not as scalable as crypto mining because HPC earnings are simply a fixed% markup from the cost of revenue.

This does not look probable yet and there is no guidance for such action. Nevertheless, it is a common occurrence in a crypto bear market. Stronghold Digital Mining (SDIG) sold 26,000 mining machines to repay its debt.

We do not think that offloading GPUs is a good idea. Due to the releases of next-gen GPUs and the risk of recession, GPU prices dropped as much as 90% of their MSRPs. Hence, HIVE will take on heavy losses that are hard to recover from.

Therefore, we believe investors would receive a greater benefit if HIVE acquired more mining rigs instead of offloading them in the current market landscape. In this case, we think that diluting shareholders (just like HUT) would be the lesser evil than offloading GPU mining rigs.

What Should Investors Expect in Q4 onwards?

Since ETC is HIVE’s most probable destination, let’s estimate how pivoting to ETC from ETH will impact HIVE’s profitability.

According to Table 1, ETH contributed around 40% of total revenue. Based on www.coinwarz.com calculations (Fig. 4), ETH is 50% more profitable to mine than ETC. Assuming no downtime and seamless transition, HIVE’s non-BTC-related revenue is expected to drop 31% or 13% of total revenue.

Of course, we expect HIVE to stabilize its operations over a few quarters and do not expect such a minimal impact. But more importantly, HIVE will not be able to just switch to a less profitable altcoin because the influx of hashing power will increase mining difficulty and will decrease the profitability per unit of hash rate. Hence, we should think of 13% as the minimum reduction in revenue from Q3 onwards.

We showed how ETH is expected to complete its transition to PoS next month and how HIVE might tackle this problem. HIVE has been guiding investors that it is committed to substituting ETH with other altcoins such as ETC and using part of its resource to offer HPC services.

We showed that HIVE’s revenue is expected to decrease at least 11% due to downtime and an increase in mining difficulty due to the influx of hashing power.

Based on 2022Q2 performance and the positive correlation between altcoins and Bitcoin, Bitcoin has to be $ 54,280 to justify its current valuation based on a PE ratio of 5, compared to HUT’s $ 61,400.

We also had to mention that HIVE only has $ 4mil of cash at the end of 2022Q2 to tackle such a massive operation pivoting away from ETH. This means that HIVE will have to raise funds through shareholder dilution or crypto reserve liquidation (consisting of 6,820 ETH and 3,091 BTC valued at $ 75mil as at the time of writing). Both actions will devalue the company on a per-share basis.

All in all, holding Bitcoin is still an overall better investment than HIVE.