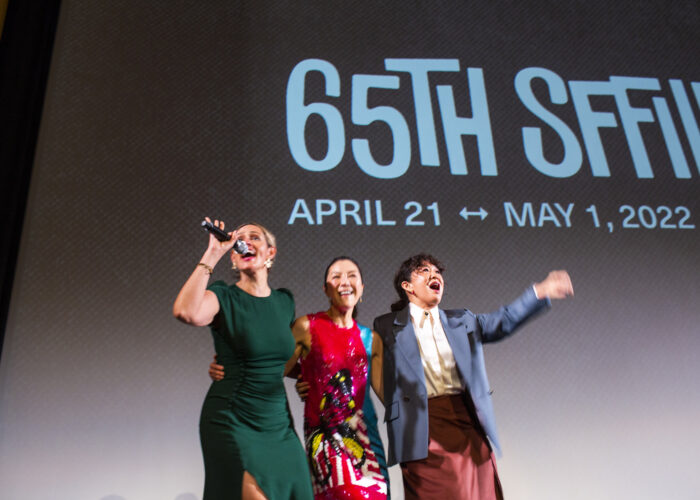 After presenting only the second screening in the world of her new film “Everything Everywhere All at Once” at the Castro Theater last month, Michelle Yeoh returned to the historic movie house for an enthusiastic encore to celebrate her career during a special tribute at the San. Francisco International Film Festival on Friday, April 29.

After a highlights reel of Yeoh’s work throughout the years – from Hong Kong martial arts films to her James Bond film “Tomorrow Never Dies” to “Crouching Tiger, Hidden Dragon” – she was interviewed onstage by “Killing Eve” actress Sandra Oh for more than an hour, capped off by the two leading the near-sellout crowd in a dance party.

But first, the interview.

“Oh my God, look at my notes,” Oh told the crowd to laughter as she pulled out a big notebook to begin the evening. “I’m Asian!”

And yet, it was hardly an interview. Instead, the two stars sat in comfy chairs across from each other – first rearranged by Oh to her liking – sipping red wine, chatting it up like the best of friends.

“Michelle Yeoh has an exquisite taste in red wine, by the way,” Oh said. “We have two bottles. I think we’re going over! ”

The actresses shared stories about their battles with stage fright, including right before coming onstage at the Castro, as well as their working methods and approaches to acting. Oh pressed Yeoh for details about her unique rise in the industry in the 1980s, when she turned her ballet training into martial arts moves to become Hong Kong’s preeminent female action star.

They also discussed the commitment that it takes to achieve longevity in the entertainment business, and their mutual love of rising actress Stephanie Hsu, who plays Yeoh’s daughter in “Everything” and has acted with Oh on the stage.

Then, bonding over their “typical Asian mothers,” Yeoh mentioned that parts in “Everywhere” when she was a movie star were her mother’s favorite scenes.

Oh shook her head. “It never stops, does it?”

Yeoh added, “Asian parents especially. When I go home, my mom will say, ‘You did not cut your hair?’ I’m like, ‘Hi mom, I haven’t seen you in two months.’ ”

Oh laughed. “I do not know why, but that really made me feel better. ”

Before the event, Yeoh and Oh met with members of the media at nearby Spark Arts, an event space in the Castro featuring monthly exhibits by local artists. While they are not exactly “local” artists – Yeoh is originally from Malaysia, Oh from Canada – Yeoh stressed she does have a Bay Area tie.

“I have extended family here,” she said. “I’ve always had a soft spot for San Francisco. I love it here, and this is a very good excuse to come back to San Francisco. ”

As to being feted by SFFilm, Yeoh said, “I was very touched, very humbled by this. I do not think I deserve it. Not yet! ”

Since Yeoh’s last visit, “Everything Everywhere All at Once” has become an unexpected breakout hit, topping $ 30 million and counting. The action flick, in which Yeoh plays an immigrant coin-laundry owner who fights for her family using skills from her other selves in the multiverse, is on its fourth straight weekend of making at least $ 5 million at the box office, and this week was brought back to IMAX screens across the country. Made on a $ 25 million budget, it is expected to clear at least $ 40 million domestically and perhaps become A24’s highest-grossing film; its 2018 horror film “Hereditary” grossed $ 44.1 million in the US

“It’s going really, really well, and we’re all proud of it, and how everyone has reacted to it,” Yeoh told The Chronicle. “It becomes such a conversation, and people who have not seen it are like FOMO (fear of missing out). I’m grateful.

“I’m also really happy because we have Andrew Garfield promoting our movie instead of his own,” she added, with a laugh. “I saw him on TV and he was supposed to be promoting (his new FX / Hulu series) ‘Under the Banner from Heaven,’ but all he kept talking about was ‘Everything Everywhere All at Once’!”

Indeed, Garfield, who was recently spotted at a Los Angeles screening of “Everything” with fellow Spider-Man Tobey Maguire, told reporters at a press junket that the film is “a riot, and it’s so moving, you cry together, you laugh together, it’s the thing we all need. “

Onstage with Oh, Yeoh said she and the cast got emotional while watching the film with the Castro audience in March.

“The last time I saw it – the fourth time – was here,” she said. “The way (the audience) reacted was very visceral. Everyone was laughing together and crying together… That embrace and love of our film (from the Castro audience), we were all crying backstage. ”

Oh, who admitted she was “so excited” to be tapped by SFFilm for the opportunity to interview Yeoh at the Castro, is on a career high, too. Her hit television series “Killing Eve” wrapped up its fourth and final season, drawing big numbers on AMC.

“I gotta tell you, playing Eve Polastri changed my life,” Oh told fans when both she and Yeoh were asked during a spirited Q&A what roles transformed them. “It’s a growing acceptance of self, and integrating Villanelle (Jodie Comer) was a part of that. It is almost difficult to explain because it was such a deep, psychological process. … I spent the four seasons with Eve growing into this. Which doesn’t mean she was ‘happy,’ or ‘normal,’ or all of those things we are taught to believe what life is, but I will say she’s truer. She’s more whole.

“I think I did grow as a person playing her.”

Yeoh, who has said playing Evelyn Wang in “Everything” has been a career-defining experience, followed up Oh by saying, “We are so blessed that we get to walk in and out of the lives of these characters. I What I found is they were able to find joy. This family, they never gave up. And that’s what we have to do for each other. … Do not give up, and believe in who you are. At the end of the day, stay strong. ”

And with that, Yeoh, Oh and about 1,400 fans got up and danced to Whitney Houston’s “I Wanna Dance With Somebody.”

Michelle Yeoh and Sandra Oh dancing is really what I needed to see today 💕 pic.twitter.com/ILxseHURc1